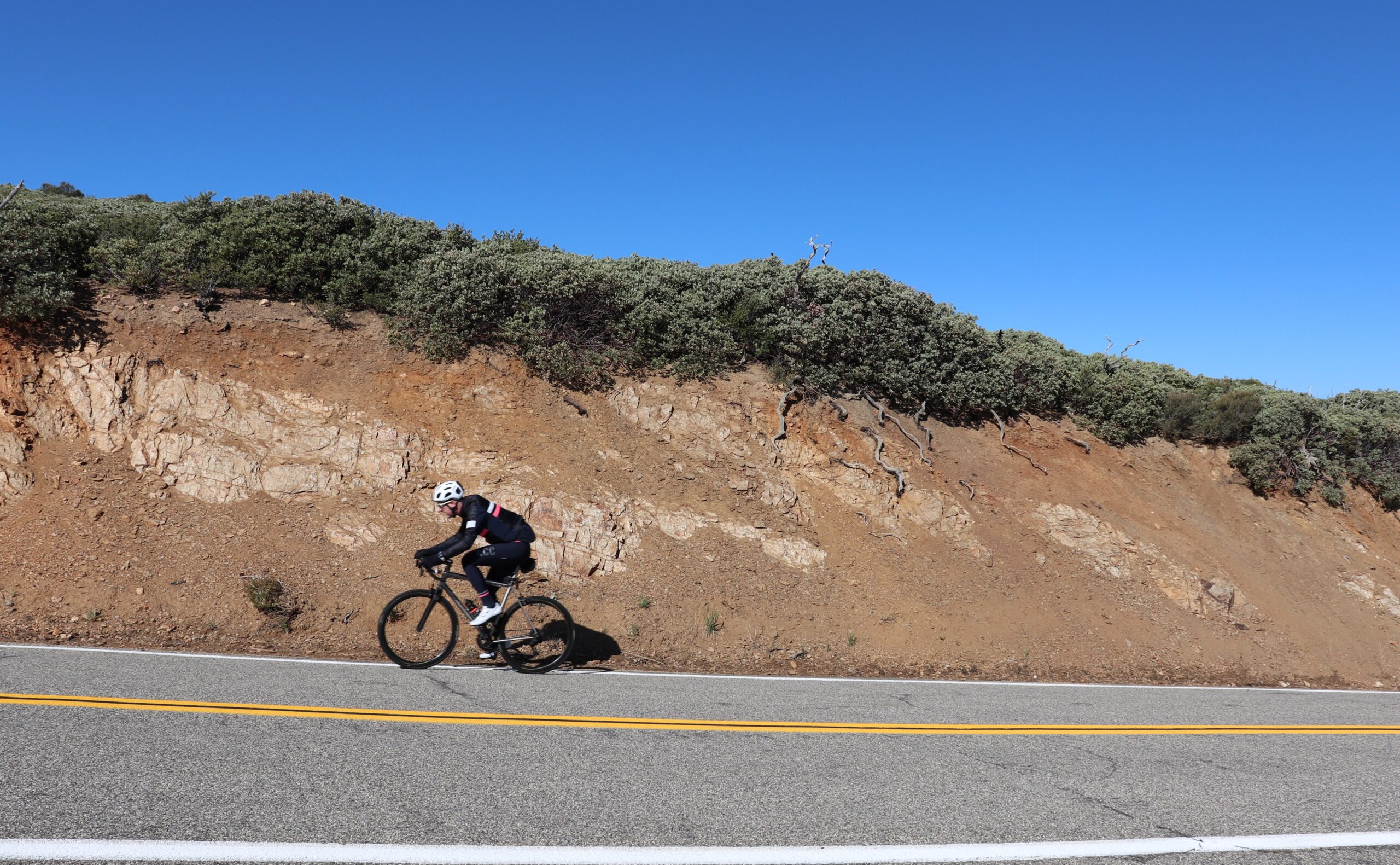 On April 23rd, I completed the Mt. Laguna Classic century, a 100-mile bike ride in San Diego County. I am so happy that I signed up for and participated in this event. The route was both beautiful and challenging. Also, since I was unfamiliar with the area, this event provided a great introduction to cycling in the area.

(Note: Due to being busy with work and other commitments, I have postponed writing about this event, so it’s being posted a quite a bit later than I had wanted.)

The 100-mile route features three climbs to the summit of Mt. Laguna, on three different roads. The climbs are arranged in order of increasing difficulty. This is a tough route with over 3,100 meters of climbing.

CA-79 North / Sunrise Highway. This is a long (approximately 45 km) climb, with an elevation gain of over 1,130 meters. According to RWGPS, the maximum gradient is 11.7%, but the average gradient is only 1.8 percent, due to several rollers and flat sections. Overall, this an easy climb, particularly in the morning when the temperatures are cool. Consequently, I made good time on this section of the course.

Kitchen Creek. This is an HC category climb, with an elevation gain of 931 meters over 22.1 km. Significantly more difficult than the climb up Sunrise Highway, this climb features a maximum gradient of 11.0% and an average gradient of 3.6%. The road conditions on this climb are pretty good, although about half of the climb is on a section of paved road that is unmaintained and closed to motorized vehicles. There are occasional potholes and longish sections that have tall weeds growing from cracks in the pavement.

About halfway up Kitchen Creek, the weather really started warming up, but the temperature did not exceed 25C. A fairly heavy crosswind caused the temperature to feel less warm than it was, and once I reach Sunrise Highway near the top of the climb, the temperature cooled down again–a welcome relief.

Pine Creek. The shortest of the three climbs featured on this route, Pink Creek is also the most challenging. It was also the warmest. The climb is 20 km, with a total elevation gain of 829 meters. According to RWGPS, the maximum gradient is 16.5%. This may be lower than actual, however, as several people have mentioned the maximum gradient was around 20%. The steep pitches were not the most challenging aspect of this climb, however. The Pine Creek is dotted with small and large potholes and covered in sand, gravel, and rocks, making the climb technically challenging as well as physically demanding. In several spots, for example, my rear wheel lost traction due to sand and gravel on the road. In some spots, I opted to walk my bike. I was running Continental GP 5000 TL tires, and I worried about sidewall damage in some spots where rocks were unavoidable.

On the second half of the climb, the temperatures rose quickly above 30C. As discussed below, I had underestimated the high temperature and opted to wear a long sleeve jersey. I was absolutely overheating!

An interesting feature of this route is that although there are three routes to the summit, there is only one descent: Sunrise Highway. It is a fast descent with large, sweeping turns. Unfortunately, there are a couple of spots at the beginning of the descent where there are some nasty bumps/potholes in the road.

On my second descent, I did not see the pothole and rode ride across it. One of my water bottles jumped out of the bottle cage and flew off to the side of the road. Fortunately, I did not suffer any tire damage.

In addition, there were strong, gusty crosswinds coming around some of the bends in the road, adding a bit of challenge and excitement.

Prior to the ride, I had checked the weather conditions using the Epic Ride Weather app. The forecast reported by the app showed that for the first 3 hours of the ride, the temperature would be below 12C , and that the high would be under 18C.

Once again, however, the highs were grossly understated. Unfortunately, I opted to wear a long-sleeve jersey and tights, rather than arm and leg warmers. Although this attire worked well for the majority of the ride, I overheated on Pine Creek. According to the temperature recorded by my Garmin, the temperature on the climb up Pine Creek rose above 30C during the second half of the climb.

With two of the three stages of the King of the Mountains Century Challenge completed, I am currently 4th overall and 1st in my age group. Granted, these standings are primarily the result of the small size of the field on the Mt. Laguna Challenge and the even smaller number of cyclists who completed both events.

I am not training for the Heartbreak Double Century, which will be held on May 28, 2022. It is the third and final ride in the King of the Mountains Century Challenge.